Is there a risk of Cross Infection? Our research shows there is.

In August 2019, we randomly swabbed the internal aspect of the face hole of five therapy beds from five different private clinics in Australia for analysis. Four out of five of these beds were using a terry towelling cover as well as the current X-cut and round-cut paper based head sheets (brand unknown) as standard practice. The final clinic was not using any bed cover but was using a paper towel as the barrier between the client and the bed around the face hole. Of these 5 beds, the findings were as follows:

- All five beds showed moderate to large quantities of non-harmful bacteria, including but not limited to, skins cells and skin flora. 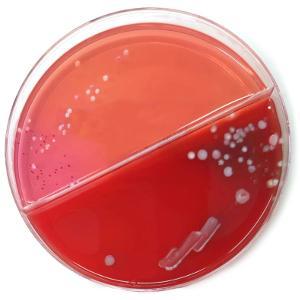 Actual image of the antibiotic resistant Staphylococcus Aureus from one of our random swabs.

As a consumer’s mucosal surfaces (eyes, nose and mouth) can be exposed to this bacteria when lying face down on a therapy bed, their susceptibility to cross infection and illness increases without suitable infection control and prevention practices.

Our reputation as an industry leader in the development of hygiene solutions for physiotherapists has been amplified by the Australian Physiotherapy Association’s endorsement of two of our products. Which ones? Read on to find out all the details.

The BodyShield is Unlike Other Bed Covers. Here’s Why!

You want to guarantee hygiene protection. You want to save time and money on laundering costs, and be more eco-friendly. Recycling is important to you. Your clients love comfort and you want to offer them a premium product. You’re always looking for that point of difference. You need something that’s easy to store and quick to apply. Does your current bed cover meet ALL your requirements? Our BodyShield does.
Read More

To reduce the risk of infection

Thousands of therapists worldwide already have. Don't miss out. Subscribe to the latest news and updates.